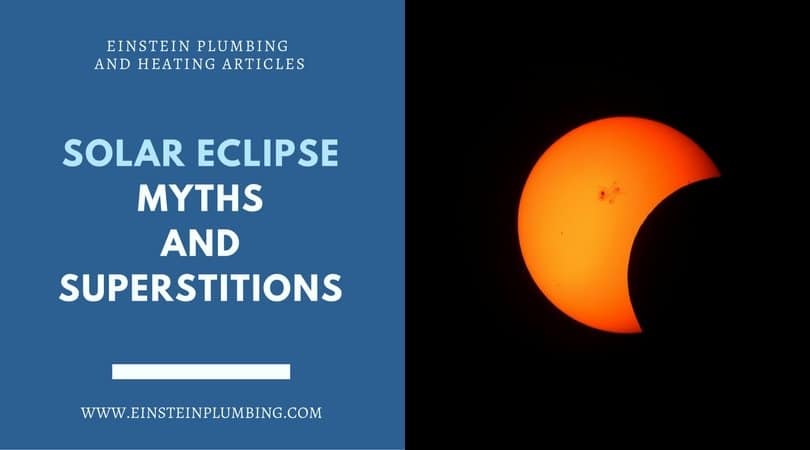 Millions of Americans are prepping up for the great American Eclipse this August 21, the first complete solar eclipse to cross the country coast to coast in nearly 100 years.

People are having watch parties, community events, and day trips to catch this once-in-a-lifetime celestial spectacle, but solar eclipses weren’t always as accepted as they are today. In fact, the word “eclipse,” derived from a Greek term for “abandonment,” was seen as the sun abandoning the earth and its people, neglecting everyone in the dark. Still, most people around the world still consider solar eclipses evil omens that indicating the onset of destruction and death.

Here are some bizarre myths or superstitions about solar eclipses:

1. If you are pregnant, you should not watch an eclipse because it can harm your baby

There have been some worries about solar eclipses and how they could affect unborn children. But this is just some false idea. Imagine, each day our bodies are bombarded with solar radiation (sunburns, which come from ultraviolet radiation from the sun). There are even difficult-to-detect subatomic particles emitting from the sun called neutrinos that start out in the sun’s core. But they don’t cause us any harm. So, solar eclipses is an entirely harmless event and would not harm you, or if you are pregnant, the developing fetus.

2. Eclipses will poison any food that is served during the event

Similar to the false idea of harmful solar rays is that during a solar eclipse, some radiation is created that will harm your food. If someone is unintentionally food-poisoned during an eclipse, some might claim that the event was related to the eclipse itself even though numbers of other people at the same location were not at all affected.

3. Flushing out during a Solar Eclipse

During a phenomenal event like the solar eclipse, some may say that flushing a toilet during a solar eclipse is risky. Similar to events like the myth about halftime bathroom use during Super Bowl that municipal systems are pushed to the breaking point (or bursting point) just doesn’t hold water. However, this incident was due to aging pipes, and not, as many may think, a mass rush to use the toilet.

4. Harbinger of something terrible about to happen

So if ever you have a plumbing problem such as leaks, clogged toilets, broken pipe, or water heater malfunctions during Oregon solar eclipse, you shouldn’t blame the event, maybe your plumbing system has reached its working limit.

The ancient Greeks thought that a solar eclipse was a symbol of angry Gods and that it was the beginning of destruction and disasters.

7. Eclipses are a sign of an extraordinary celestial event taking place in time and space

Because they can be mathematically foretold across thousands of years, solar eclipses are re-affirmation that there is a breath-taking clockwork regularity to the universe as Sir Isaac Newton admired over 300 years ago.

Astronomers and scientists around the world have debunked any such claims. There is no scientific proof that solar eclipses can affect human health, behavior, or the environment. Scientists, however, do emphasize that anyone who’s watching a solar eclipse in Salem, Portland Oregon or in South Carolina where the center line is, must protect their eyes.

You may want to check out our other plumbing articles:

When Do You Need A Water Heater Replacement?

Deciding whether your water heater needs repair or replacement is trick decision.  When Do You

Calling A Boise Plumber – Ultimate Guide For You

Calling A Boise Plumber If you want to Call A Plumber in Boise, you might

Do you want to be self-sufficient in handling leak repairs? Are you searching the internet

Are you looking for tips that can be a Drain Cleaning Guide for you? Do