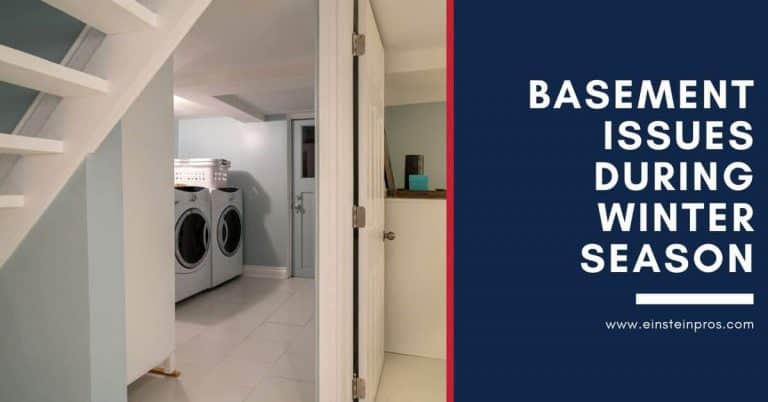 Aside from the bathroom and the kitchen, there is one other part of the household that can be heavily damaged during winter— the basement issues during winter.

For most households, the basement is the storage of many plumbing fixtures and appliances, from the tanks to the washing machine.

And nothing more annoying than having to deal with a problematic basement during the coldest season of the year.

Flooding in the Basement

The most common problems homeowners face is flooding. Since it is an area that is prone to water accumulation, it is no surprise that the basement can be a target for flooding

Due to internal heating from the house, snow and ice surrounding the home can melt and flow towards the basement. Additionally, the frequent change of temperature can also be a major factor in this.

When too much water has accumulated, a phenomenon called hydrostatic pressure, a downward pull of gravity, occurs which allows water to flow around the basement walls causing deterioration.

Similarly, even if the house is properly engineered to keep water out, unseen cracks and holes can allow snow to move freely inside.

Melted snow is not the only problem you can encounter in a basement flooding. Due to the cold climate, some pipes can burst when frozen. This creates small cracks and leaks allowing water waste to flow around the house.

Most basements have a sump pump installed. These fixtures are designed to collect excess water and allow them to move away from the house. When the pump is not turned on or is malfunctioning, the excess water begins to accumulate which then leads to flooding.

It is important to take ahead of immediate threats before winter. Make sure that all your household fixtures are well maintained and working.

How to Turn the Water Off to Your Home

Spring Plumbing Tips to Help you Get Ready for the Season 

Tips to Protect Your Heating System from Winter Weather

How to Unclog a Drain

How to Choose a Tankless Water Heater